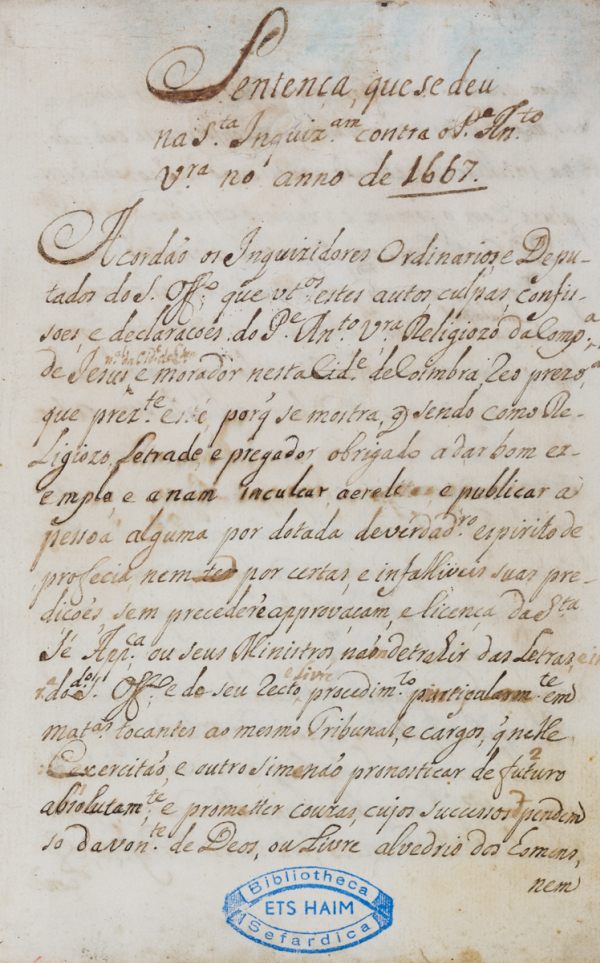 Sentence of the Inquisition of Lisbon against Antonio Vieira, 1667, late 17th century copy

Contains a fragment of another part of Vieira’s trial on f. 45-46r.

António Vieira (1608-1697) was an influential Jesuit orator and considered the foremost Portuguese seventh-century prose writer. He was born in Lisbon, but he grew up in Bahia (Brazil), where he entered the Society of Jesus in 1623. When John IV ascended to the Portuguese throne, Vieira returned to Portugal. He became court preacher and a confidant of the king, who sent him on diplomatic missions to The Hague, Paris and Rome. In 1652, he returned to Brazil and devoted himself to a missionary live in Maranhão. Back in Portugal, Vieira fell subject to trial by the Inquisition in 1663, accused of heresy. The interrogations on alleged heretic propositions contained in his writings lasted till 1667. On December 23, the sentence was published: Vieira was forbidden from preaching and condemned to imprisonment in a Jesuit college. At first he stayed in the Jesuit College of Coimbra but, in March of 1668, he was transferred to Lisbon. On June 12, Vieira was released of his imprisonment penalty. Then he left for Rome, where he pleaded the cause of Portuguese New Christians. Vieira returned to Lisbon in 1675 and, six years later, he sailed back to Brazil, where he died.